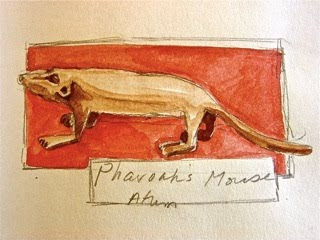 There is now a rat in my attic, I kid you not, that sounds like it is the size of a beagle. It sits on the heating duct and gnaws something (please god, not the electric cables) and the reverberations through the aluminum flumes makes a sound akin to chopping wood. It might have been a mistake to evict the rats from the hot tub.
*****
I'll end there, although rats, their pads, and their relationship to our own species provide endless stories—like the time I thought there was a pink, foot-long snake hanging out of the magazine rack next to the toilet, but it was only a rat tail!
Watch for RATPADS in bookstores or, better yet, pre-order The Quarter Acre Farm, which will hit shelves March 1.
Posted by Leslie Larson at 1:00 PM