What’s on my desk?

Though I didn’t realize it until this inventory, most of the things on my desk are talisman that I hope will lend me their magical powers while I write. I try to cover all my bases with a variety of charms. 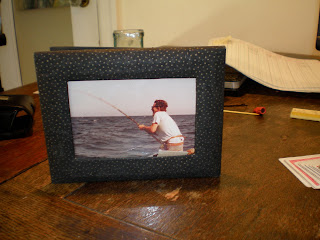 Photo of my dad. His wristwatch.
He’s very happy in the photo because he’s catching a fish. A big one. The watch has a black face and a black leather strap. It’s very worn. He used to take it off and let me wear it when I was a kid, but only for a minute. He died recently. I ask him to send help from the other side. 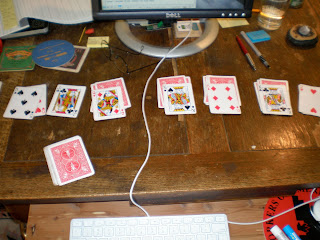 Deck of cards
Solitaire is a great way to waste time and to tap into your unconscious simultaneously. 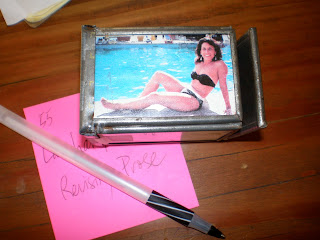 Evil Eye begone (not pictured)
Obvious reasons
Toothpick holder with a different swimsuit-clad Mexican movie star on each side
My girlfriend Carla gave it to me. She included a photo of herself, poolside. Before I stopped smoking many moons ago, I toked constantly while I was writing. Now when the going gets tough, a toothpick is a good substitute. 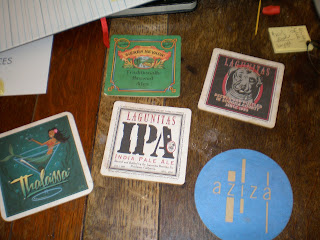 Bar coasters, lots of them
For all the water and the many cups of tea and coffee. Plus they’re good to wing across the room when I’m frustrated. My favorites are Lagunitas (dog’s head), Aziza (light blue circle) and the Kona Club (mermaid in a martini glass). 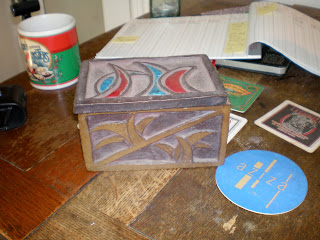 Candle (not pictured)
Code Blue help for the worst writing crises
A clay stashbox
I made it in Art class in the 11th grade. It was San Diego in the 1970s. Almost everyone in the class made a stashbox. The ones who didn’t made ashtrays. 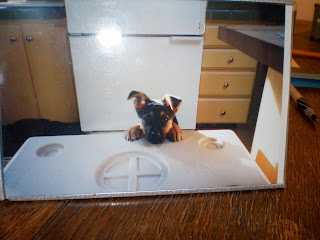 My dog Leyla as a puppy
The adult version is usually sprawled on the floor beside me. If I’m really stuck, I lie down beside her. Her animal energy pushes my reset button. 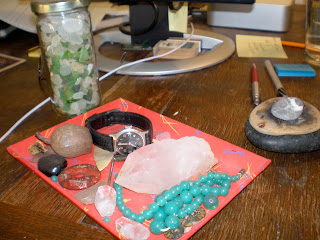 Various stones, shells, bits of glass, and plant debris
For creative energy and inspiration. I don’t dust them as often as I should. 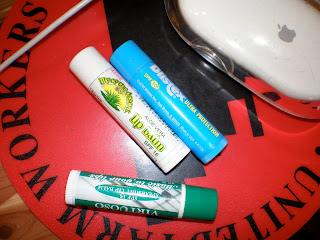 Chapstick
I’m addicted
That’s me. How about you? I’d love to know…
Posted by Leslie Larson at 4:11 PM No comments:

I didn’t know much about crystals and their powers when I began Breaking Out of Bedlam, but I wanted my protagonist, Cora Sledge, to have—and lose—a powerful talisman from her past. Because stones and rocks play an important part in the novel, I chose a crystal.

While researching the Cora’s stone, I became absorbed with the folklore surrounding the crystals found in parts of Arkansas. Locals believe in their power, and many of them carry them around in their pockets. You can pay a $10 fee and spend the whole day in a hot dirt field digging crystals and filling as many buckets as you can. Each stone has unique characteristics that are described with intriguing words like keys, ladders, wands, fairy frost, etc. I had a lot of fun describing Cora’s rock and what she sees in it. I came to feel its power in the story, the way she drew comfort and strength from it and why she was thrown out of whack when it disappeared.

I talked to a woman who was sick from the chemo and radiation treatments she’d received for cancer. She was very ill when she began wading in a lake near the place she was living in Arkansas. Locals told her there was quartz under the lake and that Native Americans, as well as more recent inhabitants, believed in its healing properties. She gradually got better until she could write, paint, and live again. She became obsessed with the crystals, began digging them herself, and now sells them over the internet, placing each one (whose energy she intuits and describes) up for “adoption.”

I explained why I needed a crystal and she picked one for me—a pointed one called a hand-holder because it fits exactly into your closed hand. When I wanted to know how Cora drew comfort from it, I held it to my face like she did. The climactic scene where she finds her stolen rock signals the recovery her essential self, of the person she was before life intervened.

Here’s an excerpt from Breaking Out of Bedlam, where Cora talks about her crystal:


This rock came from my great aunt Alpha, who dug it herself in the Ouachita Mountains down there in Arkansas, where my daddy’s family’s from. They’re known for their crystals, some of the most beautiful in the world. People around there wear them, or carry them in their pockets. Say they’re sacred, with magical powers for healing, and for seeing into the past and the future.
Aunt Alpha, she used them rocks for scrying, or what you’d call fortune-telling. People came from all over to ask her advice or to talk with people who’d passed on. She had a room at the back of her house where she lit candles, burned some kind of smelly brush, and looked into those crystals to make contact with the other world. She smoked a corncob pipe and kept a thousand cats. Us kids were scared to death of her.
My crystal is what you call a hand holder because it fits right in your palm. It’s quartz, like a big lump of ice. One end is pointed and as clear as water. The other end, where it broke off from the ground, is frosty. It’s called phantom crystal because of the shapes inside it—pictures like the mountains it came from, a waterfall, and a fish. There’s a face with a beard and a broke-off branch. The more you stare into it, the more you see. Pretty soon you yourself are inside the rock, walking between icy cliffs, with that fairy frost swirling around you. Up toward the point, my crystal has two bubbles of water locked in it, like they’re dancing with each other, floating to the top. That water’s been in there forever. Millions of years.
My daddy gave me that crystal when I was seventeen years old, a few months before I married Abel. That was one of the blackest periods of my life. I was desperate, let’s just say that. Young as I was, I was backed into a corner I couldn’t see my way out of. It’s one of those things I never talked about. Too much pain, and too much torment. But that rock. He gave it to me as something hard, something to hold on to.
I like to hold it against my cheek or neck, or sometimes my forehead. If you’re hot or have a fever, it feels like a big chunk of ice. If you’re cold, it’s like a hot water bottle. I feel the life inside it, and the place it comes from, the place where I grew up, the rivers and lakes, and the springs bubbling up through the rocks. This far from home, way out here by this ocean that I never even saw ‘til I was all grown up, I remember the smells of my family and how my ma’s hands felt when she pulled the comforter up under my chin at night.
Sometimes when I stare into it I see the faces of men I might have married, children I might have had, or houses I might have lived in. I see storms moving in and the sun coming out. Lightning strikes, hoot owls, and car wrecks. I don’t have Aunt Alpha’s gift, but I’ve asked the crystal what’s going to become of me. Or I try to ask those that’s passed over to the other side what it’s like. If they’re happy and what’s in store for me. I hold the rock against my temple and ask the dead ones, my mother and father, to protect me. To use what they’ve learned to guide me and keep me safe.
Your rock Abel called it, and that’s what it is. He’d bring it out of the china cabinet to show people when they came to call. He drove me crazy. He kept a bone he’d found while he was digging out the backyard. Just a chicken bone as far as I could see, but that man acted like it fell out of King Tut’s tomb. He always had to show people something, even if it meant running out in the yard and pulling an orange off the tree.

I couldn’t help but tease him about the shapes inside. “You don’t see that elephant standing there by the circus tent?” I asked, and he’d stare into that thing ‘til his eyes bugged out. “And them fields with the cows grazing near a windmill?”
I swear, that man had the imagination of a newt. “Oh, yeah. There it is! I can make it out now!” he might say. He looked real hurt when I snorted and shook my head. Poor old bastard. He must have gone fishing the day they handed out brains.
Posted by Leslie Larson at 9:20 AM 1 comment:

As my mother used to say, you start smoking pot, and before long you’re shooting heroin. That’s what happened with me and Facebook. I succumbed to peer pressure and joined up. I posted sparingly at first—mostly on weekends. Before long I was hooking up with FB every morning, maybe not posting myself, but reading my friends’ posts from the night before. Then I started posting a fair amount. Next thing I knew, I felt shaky if I didn’t check in several times a day. Now look at me. Blogging. How did that happen?

I’m going to blame it on the marketing director at Crown. She said I had to. She said my novel [Plug: Breaking Out of Bedlam (BOOB), on bookshelves January 12, 2010] won’t sell without it, that everyone’s doing it, and that if I’m at all serious about making money, I shouldn’t have to ask. Well, not quite. She said it would be a good idea. She recommended it—or at least suggested it. No pressure. She said if an author enjoys it, it’s worth doing, but if it takes too much time away from writing, or if someone plain old hates it, don’t bother. I said my writing time is precious and I don’t like to broadcast my private life all over the blogosphere. She said she understood and that was fine. I was unexpectedly disappointed. Maybe I’d try. Good, she said. Try. If it drives you crazy after a few weeks, don’t bother.

There’s only one way to find out.
Posted by Leslie Larson at 8:28 PM 1 comment: